Manhood 2.0 is a gender-transformative initiative to engage adolescent boys and young men in reflecting on the impacts of harmful gender norms in the United States.

Gender-transformative, evidence-based group education activities such as arts-based therapy, role-playing, and peer-to-peer discussion address and challenge prevalent, harmful gender norms and social expectations through an intersectional lens. They aim to introduce healthier ways to address sexual and reproductive health and rights, and to prevent teen dating violence and LGBTQ bullying.

Youth-led individual and group commitments to action encourage young men to become agents of change within their communities. 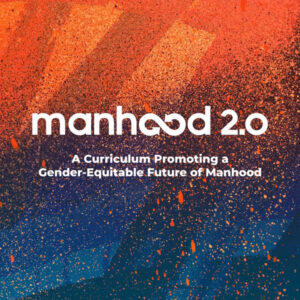 Manhood 2.0 is a gender-transformative initiative developed by Equimundo and the University of Pittsburgh to engage adolescent boys and young men (ages 15-24) in reflecting on the impacts of harmful gender norms, specifically with the aims of preventing teen pregnancy, dating violence, sexual assault, and LGBTQ bullying, and of building healthier relationships.

The initiative is an adaptation of Equimundo’s flagship Program H, an evidenced-based program launched by Equimundo and partners in 2002. The Program H methodology combines group education sessions with youth-led campaigns and activism, and has been adapted in at least 32 countries around the world.

Manhood 2.0 is designed to engage young men in the United States in questioning and challenging harmful norms, and ultimately aims to transform them. Employing a lens of intersectionality, Manhood 2.0 encourages adolescent boys and young men to reflect critically about their identities within the particular contexts in which they are formed. They are encouraged to think and talk about gender beyond the rigid divisions of male and female, to value a diversity of gender expressions, and to build healthier attitudes, behaviors, and relationships, based on respect and equality.

With implementation ongoing in Pittsburgh, Pennsylvania and Washington, DC, United States, Equimundo is working closely with local partners to ensure that Manhood 2.0 is a community-based and locally relevant curriculum for young men. Equimundo has partnered with the Latin American Youth Center for outreach to engage young men in the program. Manhood 2.0 is one of the few masculine norms-focused curricula being evaluated in the United States, currently undergoing two rigorous randomized control trial (RCTs) impact evaluations. ChildTrends serves as the external evaluator to Manhood 2.0 in Washington, DC, as does the University of Pittsburgh in Pittsburgh.

The article on the rational and design of the Manhood 2.0 RCTs in Contemporary Clinical Trials available online here.

Findings from the qualitative study evaluating Manhood 2.0 in Washington, DC are available here.

Get in touch to learn more and collaborate.