Today, June 5, Equimundo launches the State of the World’s Fathers 2019 report, revealing new data and analysis from over 40 countries, and recommendations to close the unpaid care gap. 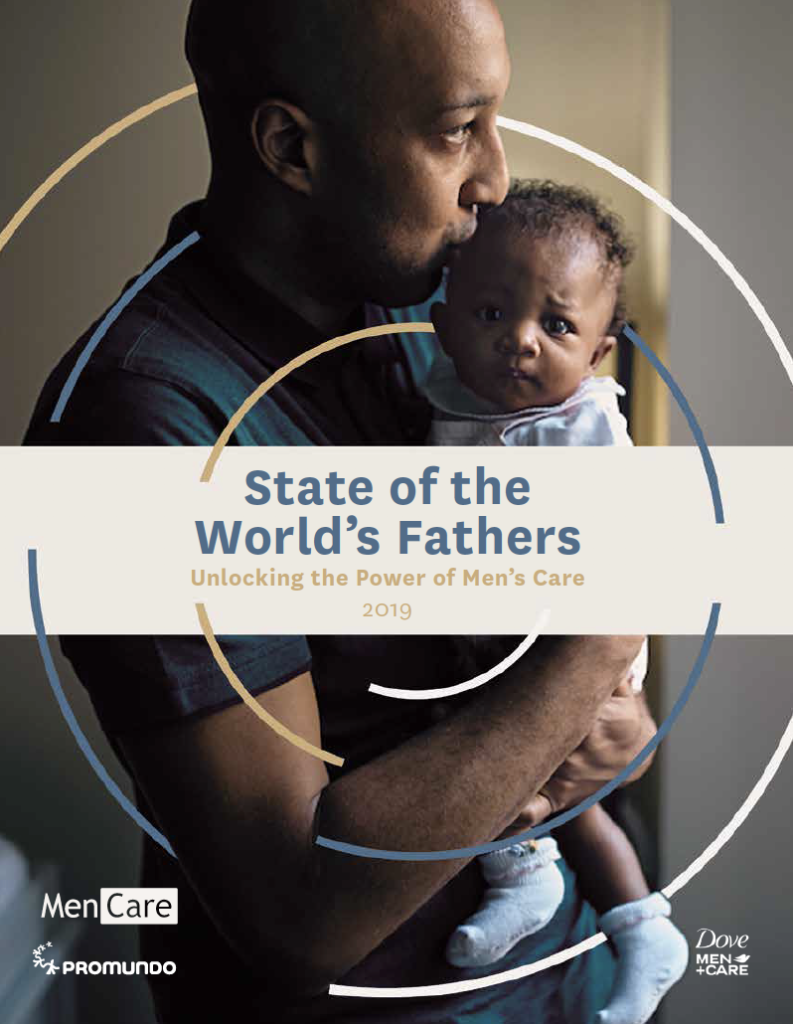 The third State of the World’s Fathers report launches today at the Women Deliver 2019 Conference in Vancouver, Canada, at an event co-hosted by Equimundo with Unilever Dove Men+Care, in advance of Father’s Day in many countries around the world.

The State of the World’s Fathers report is produced by Equimundo, co-coordinator of MenCare: A Global Fatherhood Campaign – which is active in over 55 countries. The report reveals new research findings, conducted with Unilever, Dove Men+Care in seven countries and from Plan International Canada in four countries – drawing from interviews and surveys of nearly 12,000 individuals. State of the World’s Fathers 2019 also includes cross-country data analysis from the International Men and Gender Equality Survey in more than 30 countries, and it provides recommendations to close the unpaid care gap in support of achieving gender equality.

New research across seven countries (Argentina, Brazil, Canada, Japan, Netherlands, UK, and US) finds that 85 percent* of fathers say that they would be willing to do anything to be very involved in the early weeks and months of caring for their newly born or adopted child. So, what’s holding them back?

No country in the world has achieved equality in unpaid care work – or pay equality – between men and women. The progress is incredibly slow. Across 23 middle- and high-income countries, the unpaid care gap has closed by just seven minutes over the past several decades. Globally, women spend significantly more time than men – sometimes up to ten times as much – on unpaid care, volunteer, and domestic work (and spend more time on unpaid and paid work combined). Analysis of time use data finds that if men took on at least 50 minutes more care per day (and women did 50 minutes less), we would tip the scale toward equality.

One proven policy solution to support the redistribution of unpaid care work – equal, paid, nontransferable leave for all parents, including fathers – has yet to see widespread uptake. Less than half (48 percent) of the world’s countries offer paid paternity leave, but when available, it is often less than three weeks – or sometimes only a few days.

Restrictive gender stereotypes are part of the problem. The report finds that significant proportions of men and women – from Equimundo and partner-led surveys across every region in the world – agree that “changing diapers, giving baths to children, and feeding children should be the mother’s responsibility.”

There is also a perceived competence gap on parenting, and men rely more heavily on their female partners than vice versa: across Canada, Japan, Netherlands and UK, approximately twice as many fathers say they “rely on [their] spouse for knowledge and information on parenting” as compared to mothers.

A CALL TO ACTION:

Reaching equality in unpaid care and domestic work is an urgent matter of gender justice and women’s rights. Having involved, caring fathers is good for gender equality and for women’s health. When fathers take on an equal share of the care work, it will accelerate progress for this generation and for the next, helping their children to support gender equality and break stereotypes.

“We must accelerate national commitments to support all children, parents, and families to thrive, and to achieve men’s uptake of half of the daily care of children and of our homes. Full stop,” says Gary Barker, President & CEO, Equimundo. “Anything less continues to perpetuate the inequalities that women and girls face every day.”

Governments and employers have a role in creating laws and policies that support all parents, caregivers, and families, in all their diversity, to thrive: from affordable childcare to living wages, social support to affordable education, and equal, fully paid, non-transferable parental leave. They also have a responsibility to set this crucial standard on care work, and to ensure that it is valued and shared equally.

The global report calls for countries, employers, and civil society to commit to accelerate action and support men’s increased participation in unpaid care work. Alongside the State of the World’s Father’s 2019 report, the MenCare Campaign is launching the MenCare Commitment, which aims to facilitate an enabling environment where men take on 50 percent of the unpaid care work by 2030. It also supports fathers to put their intentions to care into action by – at a minimum – taking on an additional 50 minutes a day.

Read the full report, watch the film, and download the press assets at: StateoftheWorldsFathers.org

* The multi-country average reflects calculations that give equal weight to each respondent in each subcategory, regardless of country.