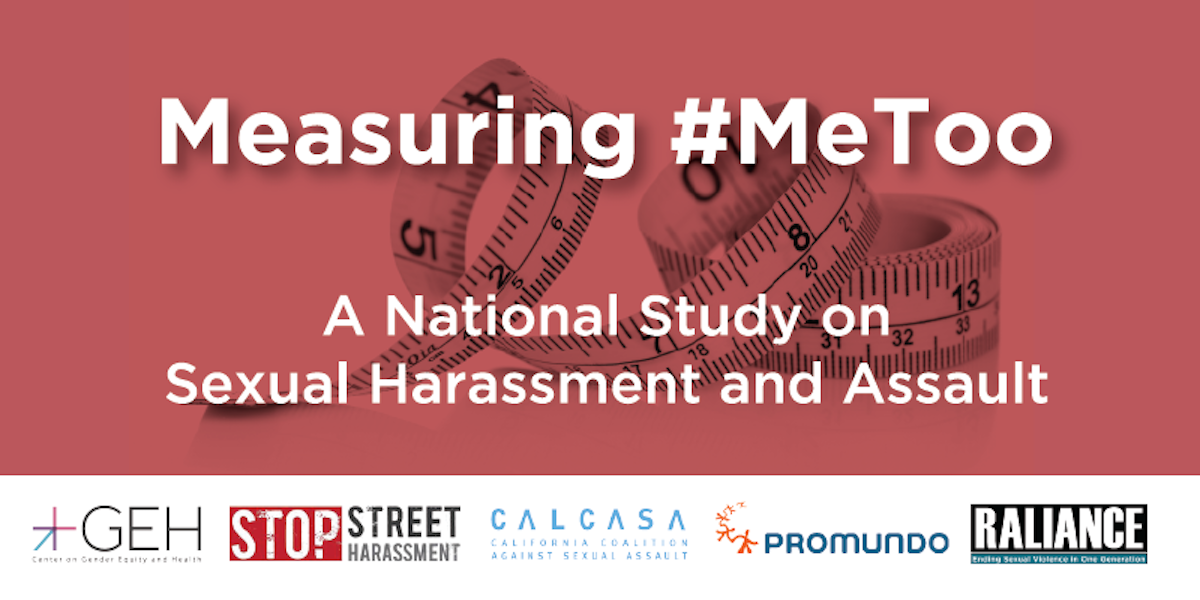 A new study released today by UC San Diego’s Center for Gender Equity and Health (GEH) and the nonprofit organization Stop Street Harassment (SSH) shows that sexual harassment and assault are widespread problems in the United States. Equimundo, California Coalition Against Sexual Assault (CALCASA), and RALIANCE partnered on the study.

Released in the wake of the groundbreaking societal reckoning with sexual harassment and assault prompted by the #MeToo movement, the study’s major findings include:

“This report demonstrates that sexual harassment is prevalent and ubiquitous in the US, no matter who you are or where you live, and at the same time we also see increased risk among some of the most marginalized groups,” said Dr. Anita Raj, Director of the UCSD Center for Gender Equity and Health.

NORC at the University of Chicago conducted the nationally representative survey of 1,182 women and 1,037 men across February – March 2019. This is the second consecutive year the organizations have partnered on a comprehensive survey of behaviors and attitudes regarding sexual harassment and assault.

Sexual harassment takes place across a range of locations, the study found, but the most frequently listed one was a public space like a street, park or store (68 percent of women and 23 percent of men). For sexual assault, both women and men listed someone else’s residence (10 percent women, 3 percent men) and their own residence (7 percent women, 2 percent men) as the most common locations.

“Our study demonstrates that the problem begins well before most people reach the workplace, with public spaces and private residences being prime locations for experiences of sexual harassment and assault,” said Holly Kearl, founder of Stop Street Harassment. “We must address the problem there, too.”

“By and large, when people say they experienced sexual harassment or assault, they are telling the truth,” said Karen Baker, RALIANCE Managing Partner. “Our workplace and community policies and programs should reflect these realities. If we want to end sexual violence in one generation, all companies and organizations must ensure that employees and members of the community know that incidents of sexual harassment, misconduct, and abuse will be swiftly and appropriately addressed.

Only 2 percent of men and 1 percent of women said that they had ever been personally accused of committing sexual harassment or assault, but at the same time, around one-third of respondents told us that they had committed one or more of the forms of harassment and assault included in the study.

“This shows why any discussion of so-called false allegations is so off-base,” said Brian Heilman, Senior Research Officer at Equimundo. “The evidence is clear that sexual harassment is real and it’s all around us, but sadly there are too few accusations of any type, since many survivors don’t feel safe in bringing these experiences to light. All of us need to demonstrate much better support to those who have experienced harassment and assault, to believe them if they choose to speak up, and to help them receive some measure of justice on their terms.”

“Prevention efforts, including education in schools as early as possible around issues of consent and harassment are crucial,” said David S. Lee, Director of Prevention, CALCASA. “We know that prevention works, and it’s necessary to shift to a culture where individuals look out for one another.”

The full report is available here.