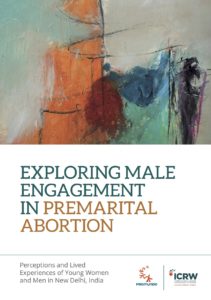 A new report from Equimundo and the International Center for Research on Women (ICRW), Exploring Male Engagement in Premarital Abortion: Young Women and Men’s Perceptions and Lived Experiences in New Delhi, India, launches today. It sheds new light on how stigma, social norms, and masculine stereotypes influence men’s involvement in premarital abortion and the post-abortion journey.

In India, unsafe abortion is the third leading cause of maternal death, and it contributes 8% to all such deaths every year. Even though unmarried women in India have the legal right to abortion, they face challenges because of the secrecy, shame, and stigma associated with premarital sex and abortion, in addition to difficulties accessing services and information.

In light of these challenges, as well as a lack of existing research on the premarital abortion journeys of young men and women, Equimundo and ICRW conducted a qualitative study to investigate young men’s attitudes, perceptions, and experiences as partners in relation to premarital abortion in New Delhi.

The study included 17 in-depth interviews with young unmarried people seeking abortion care (men and women), 6 focus group discussions with young men and women, and 15 key informant interviews with experts and service providers in New Delhi in 2018. To unpack the socio-economic factors that influence the perceptions, attitudes, and experiences of young people, participants were selected from diverse socio-economic contexts.

The findings reveal opportunities to engage with men to advance sexual and reproductive health and rights for all. Recommendations include:

Men can and must play an important role in affirming women’s access to safe abortion care, as well as in being allies in securing full and equal rights for women. In addition to the potential benefits for individual women, men’s involvement as advocates may, at a broader level, advance women’s access to safe abortion and quality care. Safe abortion with dignity is every woman’s right and is, as noted in the recent Guttmacher-Lancet Commission report, a key pillar of a comprehensive SRHR rights platform.