Results from the International Men and Gender Equality Survey (IMAGES) in the Central Region of Uganda, produced by Equimundo and the International Center for Research on Women (ICRW), launched on May 17 in Kampala. 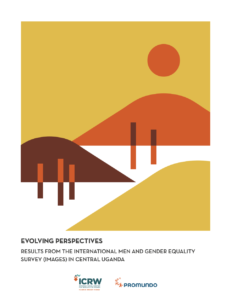 “All of us don’t just become adults out of the blue. The way our own parents nurture us sometimes teaches us [how] to nurture our own children.” – Key informant working in the nonprofit sector

With regionally representative data from for more than 2,000 respondents aged 15 to 49, the survey – completed in 2017 – represents one of the first efforts in the country to explore men’s positions on gender equality and contributes to a growing evidence base on violence, gender, and health.

The survey maps men’s and women’s attitudes and practices related to gender equality in daily life, including domestic violence, caregiving and fatherhood, health, gender norms, and economic stress. Along with a complementary qualitative study – conducted also by ICRW and Equimundo – this study contributes new insights into the intersection between violence against women and violence against children, and the barriers to and drivers for successful prevention and response efforts.

“Adults think that they have the right to discipline these children, to hold them accountable…that is okay they have that role but how they are using that power, that is the story on them, to nurture and guide children to develop discipline and stuff like that. Instead they are using violence.” – Key informant working in the nonprofit sector

Just as the findings reveal key areas of inequity, they also highlight opportunities to promote gender equality and make progress toward eliminating violence against women and children.

“Many organizations are not doing a human rights gender transformative programming. Their work only stops at awareness raising, and when people have a lot of knowledge but do not know how to transform it, it becomes problematic…” – Key informant working in the nonprofit sector

Key recommendations for governments and civil society include: